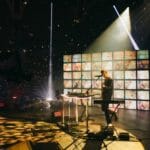 In December of 2020, Dancing Astronaut proclaimed that SG Lewis‘ then-ongoing times rollout was scripting the soundtrack for electronic’s triumphant return to the dance floor. Four months later, this return is not merely within sight, but rather a cause to save the date.

From October through December of the fall 2021 season, the British mover and shaker will take times on the road for a four-stop run both long-awaited and highly anticipated. The North American times run will specifically position SG Lewis at Los Angeles’ Shrine Expo Hall on October 15, Oakland’s Fox Theater on November 12, Chicago’s Riviera Theatre on November 26, and Brooklyn’s Great Hall at Avant Gardner on December 3.

The select run of shows affords the Dusk, Dark, Dawn conceptualist and his listeners the opportunity to experience his seminal long-form—described in his own words as “an ode to the present moment”—in the live, euphoria-ridden music spaces for which times was initially intended. Pre-sale tickets to the North American times mini-tour, which, based on times – The Live Experience, promises to be one of the year’s most transcendent sonic get togethers, will be available for purchase on April 23 at 10:00 a.m. local time. Visit SG Lewis’ official website for more information, and signup to receive pre-sale access here.

In the meantime, SG enthusiasts can read Dancing Astronaut‘s review of times here, and our interview with him here.