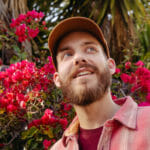 Bitbird founder San Holo made a last-minute decision to roll out not one, but two fresh, new singles in anticipation of the May 21 release of bb u ok?. The future bass talent’s sophomore album so far consists of five emotive pop songs, all of which fit comfortably under the same thematic umbrella. The Dutch DJ has incorporated his skillful electric guitar playing on each new single.

Now, “MY FAULT” and “black and white” arrive on the heels of the TikTok smash, “IT HURTS!,” which has accrued over 1.2 million Spotify streams since its March 10 release. “MY FAULT” encompasses an intimate atmosphere juxtaposed against a domineering bassline. San Holo explained,

“’MY FAULT’ is probably the most personal song I have ever written. It’s a song about a chapter in my life, a relationship with the highs and the lows.”

San Holo further revealed that “MY FAULT” was the first song he wrote on the forthcoming 20-track LP. Additionally, “black and white” follows a similar thematic approach, highlighting San’s dreamy falsettos but relaying a much more euphoric synth progression. Evidently, San Holo intends to impart a grander sense of authenticity and rawness in the upcoming project.

The double release is available on all platforms; stream the two bb u ok? additions’ official videos below.