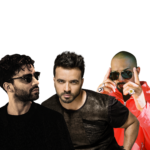 The ultimate collision of dance and latin pop hit-making has happened. Superstar producer R3HAB and latin pop sensations Luis Fonsi and Sean Paul join forces for the most sultry single of the summer “Pues.” Released on CYB3RPVNK/Universal, “Pues” is a tropically-laced dance banger. Part dance melody, part Latin-infused heater, R3HAB, Fonsi, and Paul stir up all the required ingredients for a sweaty, summertime anthem. One of his catchier recent releases, “Pues” is sun-soaked and poolside dance floor ready — fiery, melodic, and fun. One play and “Pues” will swim through the airwaves with its pulsating bassline and luring vocals and get stuck in your head for the rest of the summer months.

“It’s always a pleasure to work with industry legends such as Luis Fonsi and Sean Paul. They are both experts of their craft, and together we came up with a reggaeton-dance record perfect for warm summer nights. I’ve been having a great time making music with artists across the Latin world, like TINI, Reik, Rauw Alejandro, Hungria, and MC Jacare. I’m inspired by the diversity of music cultures within Latin music, and have many more to explore. “Pues” is different from everything I’ve released so far, and I’m glad to give it over to our fans now. I hope you love it as much as I do.” – R3HAB