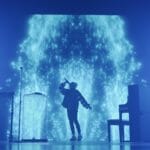 Porter Robinson did it again.

Almost a year to the date of the inaugural Secret Sky, Porter Robinson had nearly everyone in electronic music wipe their April 24 slates clean to collectively celebrate the conclusion of the seven-year wait for Nurture. Coming remotely close to the unparalleled experience provided by one of Dancing Astronaut’s top digital events of 2020—or even attempting to eclipse it—seemed reasonably infeasible, but only Porter Robinson could make that happen, and he did just that.

Remodeling the virtual auditorium for an even more immersive viewing method while driving donations to MusiCares, Secret Sky pulled together another far-reaching package of 17 artists to perform across more than nine hours’ worth of sets that—as expected—successively substituted each other on Twitter’s trending topic list. DJ Potaro was commissioned with opening the Secret Sky doors as he did in 2020, doing a 180 from his first electro house showing to pivot instead to an unexpected drum ‘n’ bass and hardcore-laden set that would be followed up with more electrifying performances from the likes of Laxcity, Imanu and Buunshin, James Ivy, Swardy, Boys Noize, Baauer, and REZZ, among others. The night was consummated with—of course—Porter Robinson, who traded out his parents’ guest room setup for a legitimate, all-out live rig, delivering the first-ever heart-stopping performance of his newly minted sophomore album.

Just before everyone could shut off their TVs and laptops for the evening, Robinson dropped the news that Second Sky would be making a fall revival for the first time since 2019 at an undisclosed venue in the Bay Area. While no additional information beyond the May 5 ticket pre-sale was made available, Second Sky’s website currently states that the festival will either be held sometime in September, or if it’s forced to postpone, on May 14 – 15, 2022.

Relive every set from Secret Sky 2021 below.

End Of The World
REZZ