The study reveals the most valuable song from every country, including many songs from electronic artists.

A new study by Australian finance blog S-Money has revealed the most valuable songs on Spotify by country.

Some of the usual suspects like Ed Sheeran and Drake are featured of course, taking the cake in the United Kingdom and Canada, respectively. The United States’ most valuable song comes courtesy of Post Malone, whose influential “Rockstar” is the clear-cut winner.

Late EDM legend Avicii‘s “Wake Me Up” is Sweden’s most-streamed song worldwide, worth well over $6 million from its staggering 1.25 billion streams to date. Alan Walker‘s “Faded” has become Norway’s most popular export, earning the DJ over $6.5 million off of nearly 1.4 billion streams.

According to S-Money, who shared additional data with EDM.com, The Chainsmokers‘ “Closer” is the most valuable dance track from the United States, with well over 2 billion streams and quickly approaching a worth of $10 million. In the UK, Calvin Harris‘ “One Kiss” has earned the famed DJ and producer nearly $6 million.

DVBBS‘ “Tsunami” is the most valuable electronic song in Canada, with over 182 million streams earning the duo nearly $900,000. The overall most streamed song in the UK, Canada, and Spain is Tones & I’s breakout global hit “Dance Monkey,” but The Chainsmokers’ “Closer” remains the most-streamed overall in the United States. 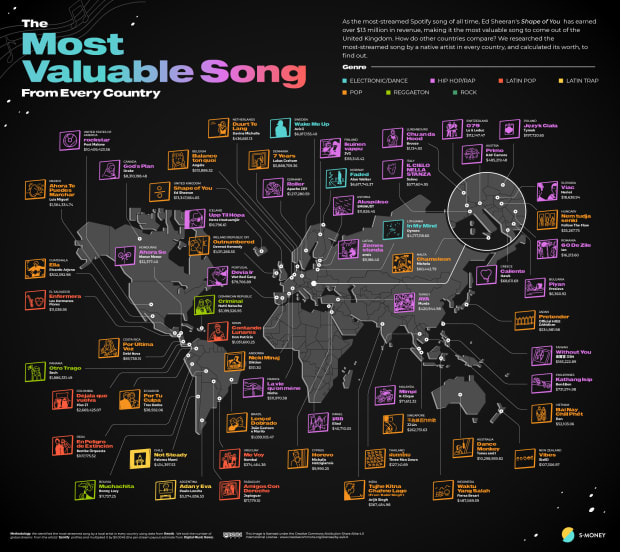 The most valuable song from every country, according to a study by S-Money.

To read the full study across all genres, visit S-Money.