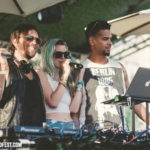 MK, Anabel Englund, and Lee Foss are back together once again, dropping off a new two-track EP titled, Break Away. The EP reunites the artists under the Pleasure State alias, and it is their first output under the shared banner since their 2014 hit, “Ghost In The System.” Break Away features title single “Break Away” in addition to “Take My Time.” Both releases find a way to merge club-worthy house undertones with Englund’s polarizing vocals, luring the listener in each step of the way.

The Pleasure State reunion is in honor of the 100th release on Foss’ Repopulate Mars imprint. Foss offered his thoughts on Break Away in an official statement, noting,

“I’m so proud that MK, Anabel, and I could bring back our group Pleasure State to mark Repopulate Mars’s 100th release with some of our best songwriting and production. It’s an important milestone for the label and I couldn’t think of a better way to ring it in.”

Pleasure State officially minted things with the supergroup’s debut EP in 2014, though MK, Englund, and Foss had been known to be writing together as early as 2012. Break Away is a satisfying reunion of the three, whether just for a fleeting two-track appearance, or an allusion to more future material underway.