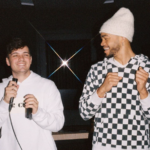 Rising from a flawlessly timed comeback teaser on January 21, 2021 at 21:21 CEST, AREA21 have fixed all eyes on their impending reinstatement. Nearly two whole years have come and gone since Martin Garrix and Maejor put forth any space-bound material under their genre-bending alias, but Garrix let the word out during a Virtual ADE conversation that the electronic-meets-rap duo would finally be reconvening that following spring for a full-length go-around. Half a year later, and AREA21 have now officially refueled their destination-less spaceship for the currently unnamed album’s introductory single, “La La La.”

“La La La” capably follows through on Garrix’s heads-up that AREA21 would stray slightly from their previous direction to instead form a three-headed mixture described as “Gorillaz meets Outkast meets a little bit of Daft Punk.” Tied to an otherworldly cartoon that Garrix had also previously mentioned would coincide with the album, AREA21 represents yet another branch of the STMPD RCRDS leader’s uninhibited production brilliance. Between Maejor’s free-spirited lyrics and a somewhat pop-leaning layout from Garrix, “La La La” puts forth a more lighthearted yet still cohesive framework compared to what was previously heard from the moniker.

If there is a single consensus on “La La La,” it’s that AREA21’s already affirmed imagination is about to be rebroadcast to the nth degree on one of Dancing Astronaut‘s most-anticipated projects of 2021. Watch the animated visual of the album’s lead single below.

The post Martin Garrix, Maejor launch AREA21 back into space to introduce their LP with ‘La La La’ appeared first on Dancing Astronaut.