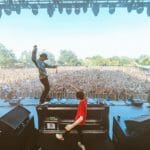 The first single from Louis The Child‘s forthcoming LP Euphoria is expectedly feel-good and aligns Robby Hauldren and Frederic J. Kennett of the two-man outfit with indie-electronic band A R I Z O N A. A vibrant amalgamation of pop-driven vocals and low-tempo house beats, “So What” struts forth on Interscope Records, following the duo’s deluxe release of Here For Now in March.

Accompanying Euphoria‘s lead single is the blueprint for Louis The Child’s Euphoria Tour, which will kick off this summer, crossing through 32 major cities in North America including Phoenix, Seattle, Austin, Dallas, Atlanta, Brooklyn, Chicago, and more, with support from Jai Wolf, K.Flay, The Knocks, Washed Out, What So Not, Whethan, Crooked Colours, Elderbrook, EVAN GIIA, Goth Babe, ilo ilo, MEMBA, Slenderbodies, and Win & Woo. Tickets to the Euphoria Tour are sale now and can be purchased here. The musical counterparts have also partnered with the nonprofit organization PLUS1 to donate $1 from each ticket sold to charities championing dignity, equity, and access to communities in need.

The post Louis The Child treat fans to a taste of ‘Euphoria’ with debut album single ‘So What’ alongside A R I Z O N A appeared first on Dancing Astronaut.