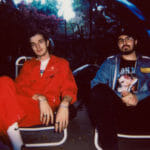 Amid stay-at-home guidelines and an ever-changing COVID-19 landscape, a brand new project emerged that gave Jack Koplin and Noah Arin of NOKO the opportunity to mentally and creatively re-evaluate and grow with their music, writing a song a day. Today, listeners know this initiative—and the former NOKO constituents—as Origami Human.

Under the NOKO title head, the collaborators amassed millions of streams and support from key tastemakers in the electronic space, with multiple No. 1 releases on Hype Machine and an opalescent EP under their belts. However, their re-imagined sonic identity as Origami Human was a transformation that they as musicians and listeners in search of euphoric soundscapes needed alike.

Their debut single, “I Still Love You,” is a projection of light-hearted and emotional bliss, with dreamy vocals from koplin set atop layered melodic harmonies. The track’s upbeat nature is bound to get anyone moving in a positive light, on or off of the dance floor. Origami Human had some words on the new release, stating

“‘I Still Love You’ was created just after live music was stripped away. It was hard to believe at the time that something like experiencing live music could be gone in an instant, and it made us realize how even those moments we often take for granted… we shouldn’t.”

Stream the first output from Koplin and Arin’s new sonic undertaking below.