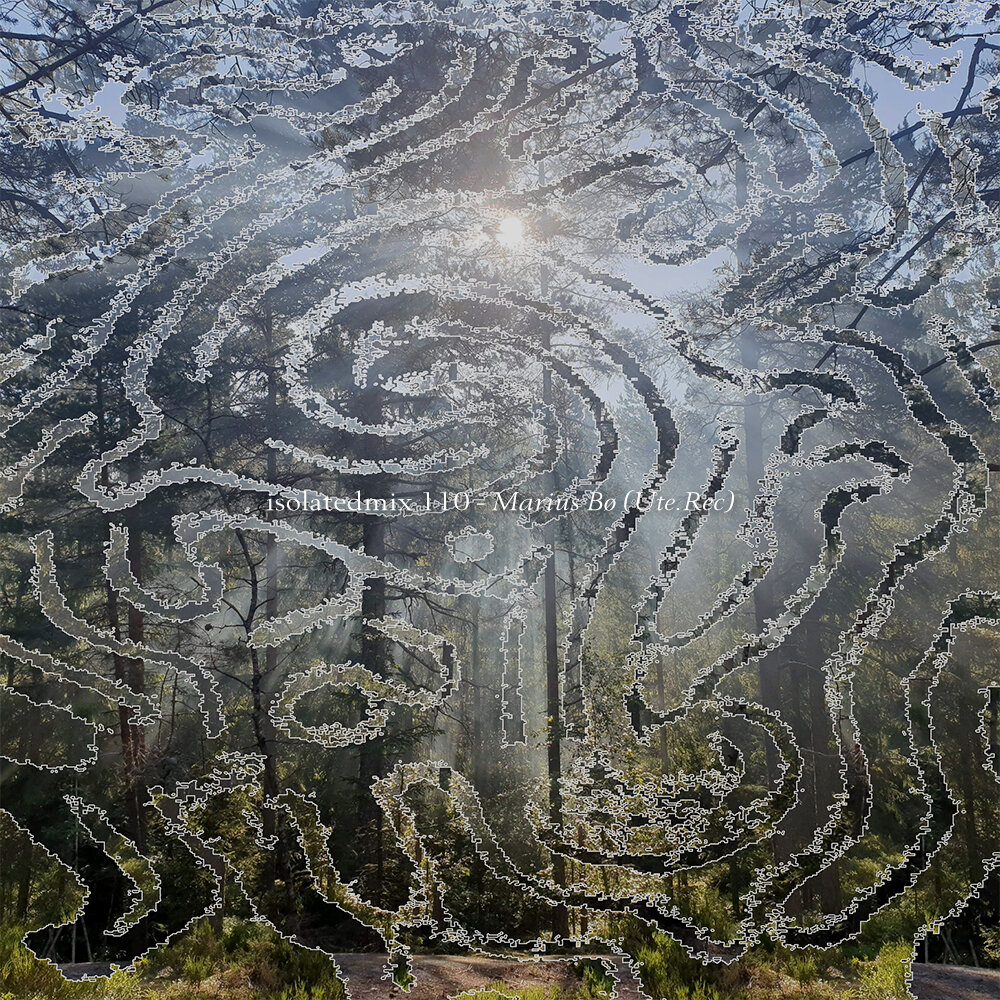 It’s no secret I’m a Trance music fan. We could debate forever, what, when or why Trance was good, but for me, it was one of my many gateways into ambient music growing up. Be it via Pete Namlook, proggy mix CDs, or 90’s pioneers such as B12 and Global Communication, where many began to blur the divide; there’s an unwritten relationship between the two genres which is hard to actually pin down. Maybe one day I will do due diligence and try and trace this connection a bit closer, but until then, I am busy unearthing the brilliant sounds emitting from UTE.REC – a label collective from Norway that manages to bridge the divide between expansive, meandering Ambient Trance, and full-on (what I may consider, proper) Trance music.

For our next isolatedmix, I invited UTE.REC and one of the founders, Marius Bø to prepare a mix that reflected the label and of course, Marius’ own personal identity as it relates to the collective. Evidently, and as many ASIP label followers may soon find out (hint!) the collective is sitting on a treasure-trove of music as their inspiration and productivity hits new highs, and alongside some classic cuts from Global Communication, James Bernard, Pete Namlook and Gas, we’re treated to a wealth of unreleased/upcoming music from UTE related artists…

I sent a few questions Mario’s way to get a bit more detail on the label and inspiration.

Can you tell us a bit about UTE, how it came about and the sub-labels?

We are a group of friends where some of us grew up together, and some of us went to high school together. We started out hosting forest raves in Oslo, which later grew into club nights, and now we also do a small intimate festival. A couple of years ago we started Ute.Rec. We had a lot of music we wanted to release, and we felt it made sense if we did it ourselves on our own platform. Starting up the sub-labels came to our minds later, when we felt that we wanted to release more music that couldn’t fit or come through on Ute.Rec. The releases are more short-term, and from in-house artists. We all love the whole spectrum of trance, ranging from goa trance to hard Trance, to ambient trance, so having different imprints where we release all these kinds makes sense to us. Sinensis is an ambient plattform where we release CDs. Every release consists of a one, hour-long ambient track to really get you to trance away. The hour-long tracks are paired with a clubbier B-side, but in the psychedelic and dreamy vibe as well. Translusid on the other hand is a digital platform where we do releases with a lot of collabs and aliases. This is a platform with more room for the artist to experiment and do things they don’t always do.

The labels are run by Teo Bachs, Filip Storsveen (Oprofessionell) and myself. In the Ute crew as whole there are also Mikkel Rev, Haider and Carl Fuck and Marilao.

What was your introduction to Trance music?

For my musical development Filter Musikk in Oslo has played a big role. Run by the local legend Roland Lifjell. Digging in the second-hand boxes in the back of his store really introduced me to the 90s trance and techno. Ranging from techno, hard trance, progressive and goa trance. Roland Lifjell was a trance DJ back in the 90s with a huge collection, and he regularly put parts of it out in the store for us trance heads to hunt. Sharing and playing music with the Ute guys is also very inspiring and educating.

Trance definitely seems to be a trendy genre for some people nowadays with many techno DJs diving into the classics. Do you think Trance gets an unfair rap nowadays?

There are definitely some not-so-good takes on the term “trance music”. But having people digging and educating themselves in trance is of course good. I understand that people seem to have some bad connotations if they only associate it with the Millenium trance era or superstar DJs dropping trance classics. The millennium era was a period with a huge lack of creativity and the music became super generic. There still are some takes on trance that have these similarities, but there will always be good and bad music of every genre I think… But for me, trance can be a kind of music filled with unique emotions, innovation and creativity instead of formula-based music for the masses.

Your label releases range from ambient to hard-trance across the 3 sublabels – is there a particular criteria you try to stick to?

I wouldn’t say that there’s a specific criteria when seeking out tracks and releases, more of a feeling and mood. It’s not so easy to put our finger on what we are looking for. We all have quite the same taste of music, so we tend to collectively know it when we hear it. When our artists are sending us tracks for releases, it often can be harder choosing which tracks to exclude rather than choosing which ones to include. With that said, we are trying to keep consistency in our releases as well as diversity.

How would you describe the Trance scene today? And specifically in Norway?

The Trance scene in Norway is absolutely growing, but not something big. The club scene, pre-pandemic, was mostly dominated by deep house and tech-house. But the scene is in progress, not just trance, but other cool genres as well, with acts like OT2, Suvatne, Snorre Magnar Solberg and Fakethias. Pre-pandemic, the bookers became more and more open-minded, opening up for a broader and better club scene. Across the Norwegian borders, the Trance scene is absolutely growing, and the Scandinavian scene as a whole is blooming. With Copenhagen and Malmø doing great things, and all over the world there are collectives doing great things in Europe, Asia and Australia.

Where else would you point people to who are looking for similar music as what they might find on UTE?

Malmø and Copenhagen as mentioned. The Copenhagen labels Amniote, VALIS, Bunkerbauer, Kengu and Kulør, and the Malmø labels Morph and Bodycount are all putting out so much great music. We actually have a fundraiser co-release with Mama Snake’s Amniote coming really soon, filled with trance, ambient and techno.

DJ wise there are acts like Lund&Rønde, Lasse Vind, Mama Snake, Ibon, DJ Tool, Ezy, Peachlyfe, Araknyl, Omniself and Courtesy really pushing it and doing great things, all of them involved in the labels above. In Malmø there is a faster and harder take on trance. They are all so skillful and the tracks are super well-produced, with so many great DJs. There is also a very exciting scene in Hague doing more experimental, tribal and psychedelic trance, with artists like Spekki Webu, Woody92 and Jeans. They have a very unique approach that I really love. And finally, the legend Alpha Tracks, who was really one of the first producers sparking trance back to life some years ago. One of the best out there…

And looking back, who is the king/queen of Trance music in your opinion?

Haha, difficult question. It’s impossible to pick out only one. But some of the artists from the early days that have influenced me a lot are Ollie Olsen, Robert Leiner, Ramin (RIP) and Pete Namlook. They all had a huge and wide output, releasing under so many different, great aliases. Just an adventure going through their catalogues… Goa trance legends like Orichalcum, The Infinity Project, Technossomy and Blue Planet Corporation are also top-tier legends for me.

And lastly, your isolatedmix, what inspired it?

The original photo is from one of our forest parties a couple of years ago. Deep in the woods of Oslo, at the end of a long and intense party, after a beautiful sunrise. I wanted to capture a little bit of that energy into this mix. Optimism and happiness for the summer and the brighter times to come. The mix starts calmly, slowly and mystically, and ends more euphorically. For me it’s a perfect listen for these beautiful spring days.

Listen on Soundcloud, Mixcloud, or the ASIP Podcast.