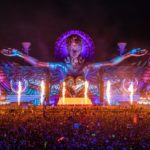 Currently, all eyes are fixed on Insomniac’s channels, waiting for a firm confirmation from head honcho Pasquale Rotella that EDC Las Vegas will go on in May as initially planned. While still a heavily speculated rumor, sources close to the brand claim that Insomniac’s flagship festival will return in May of 2021 as previously announced, with some considerable modifications.

EDC Las Vegas will purportedly take place on its originally scheduled dates of May 21 – 23, though, capacity still needs to be confirmed by Nevada state officials. Here’s the big variable still up in the air—if EDC is forced to run at 50% capacity this year, the festival will split into two weekends, each accommodating festival goers at half capacity. Word is that attendance figures will be finalized by April 14 at the latest, though a second weekend has not yet been named.

EDC Update — Sources have indicated to me that Electric Daisy Carnival (EDC): Las Vegas is a go in May, that capacity should be confirmed by April 14th, and that if the festival is capped at 50% capacity it will be split over two weekends.

An official announcement from Rotella has yet to land, though speculation started shortly after Insomniac founder Rotella shared an official update through his Instagram stating that after a submitting a robust safety plan, if approved by the state, it would allow the company to move forward with the sold out three-day event at the Las Vegas Motor Speedway.

Dancing Astronaut reached out to Insomniac and Rotella for comment, though there was no response at the time of publication. And official announcement is imminent now—stay tuned for confirmations.

The post Insomniac rumored to be moving ahead with EDC Las Vegas, proposed reduced capacity over split weekends appeared first on Dancing Astronaut.