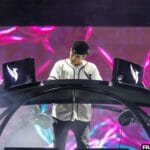 Illenium is doing something a little different this time around for part of his post-album touring plans, announcing that his incoming fourth LP Fallen Embers is being taken to Cancun, Mexico for a multi-day destination festival.

Aptly labeled “Ember Shores,” Illenium’s coinciding celebration for one of Dancing Astronaut’s most-anticipated projects of 2021 will be headed south of the border on December 3 – 5 for three all-inclusive dates at the Paradisus Resort. While no lineup was revealed along with the announce, Illenium confirmed that the festival will feature a triplet of sets from himself along with a hand-picked group of names that will stand beside him. With both official and suspected album appearances from the likes of Dabin, SLANDER, Krewella, Excision, HALIENE, Nurko, and Lights, predictions that a handful of Fallen Embers features could fill in the remaining slots seem plausible.

Tickets for “Ember Shores” go on sale on April 22 at 10AM EST here.

I’m beyond excited to announce @EmberShores – my first curated destination event. Featuring 3 unique sets from me and a hand-picked lineup at the all-inclusive Paradisus Resort December 3rd-5th in Cancun, Mexico