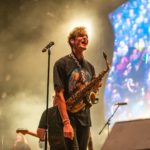 GRiZ is bringing fans his very own curated live music experience with a newly announced event, Space Camp. The two-night run is coming to Hampton Coliseum in Virginia and will feature two performances from GRiZ himself in addition to a variety of featured acts. Space Camp will take place from December 17 – 18, giving fans an exciting new artist-curated event to look forward to as live events begin to make a return.

CloZee, LSDream, Chee, and Common Creation will cover everything from bass music to experimental psychedelic soul on December 17. Night two, on December 18 will host performances by Liquid Stranger, Lucii, Dancing Astronaut‘s Breakout Artist of 2020 Moore Kismet, and Kumarion. Both nights will be capped with unique live shows from GRiZ featuring all new production, as Space Camp is poised to be one of GRiZ’s most ambitious and largest headlining shows to date.

GRiZ speaks about his inspirations behind Space Camp in an official release, sharing,

“As a kid I always wanted to go to space camp. Hang with other kids and share in that sense of adventure and imagination. So we’re throwing our own. A place to gather, explore and play. A place to be weird, to celebrate life, a place to be yourself, a place to escape earth. We’re ready for takeoff. Welcome to Space Camp.”

For those looking to attend GRiZ’s debut Space Camp, tickets will go on sale here beginning April 23 at 11:00 a.m. ET.