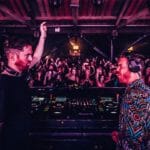 Exalted house duo Gorgon City have announced their third studio album Olympia will be released June 25, 2021. Alongside the news, Gorgon City share their newest cut from Olympia “Tell Me It’s True,” an exuberant house affair laced with deep club inspirations and a classic piano house riff. In a press release, the British group shared their inspirations behind Olympia:

“With this record we’ve definitely gone more clubby and have been inspired by the big shows that we played before lockdown. It’s a bigger sound and lyrically it’s different for us.”

Never Let Me Down (with Hayley May)

Waiting For The Right Time

Producer, Designer, and Model MADDS Is a Triple Threat — Just ...

Producer, Designer, and Model MADDS Is a Triple Threat — Just ......