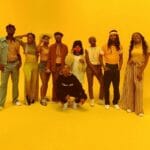 A documentary focusing on Baltimore’s club music and scene, titled Dark City: Beneath the Beat, is now available to stream on Netflix. The film was directed by TT The Artist, and includes music from artists such as Colada, Mighty Mark, and UNIIQU3. Issa Rae produced the documentary, which focuses on the “irrepressible bounce and infections beats of a Baltimore club scene that demands to be seen and heard.”

Dark City: Beneath The Beat had first premiered at 2020’s SXSW Festival. The film provides a lens into how the artists of Baltimore utilize their thriving club scene to pull away from the social and economic turmoil found in much of the community’s collective day-to-day; the scene providing a closely knit circle to those who are a part of it.

A soundtrack for the film has also been released, and features contributions from TT The Artist, Mighty Mark, Kariz Marcel, Michael J.R., and many more.

The post A new documentary about Baltimore’s bustling club scene is now on Netflix appeared first on Dancing Astronaut.

​Printworks Adds a New Industrial Room to its Warehouse Venue

​Printworks Adds a New Industrial Room to its Warehouse Venue

HVDES Revives Evanescence’s “Bring Me To Life” With ......